skip to main | skip to sidebar

As a former light infantryman, good load-bearing gear is a subject I am enthusiastic about. There are few things worse than trying to carry a large amount of heavy equipment without a good pack.

I have been very happy with the packs I have from Camelbak. I bought a H.A.W.G. in 2003, and used it for carrying books weekly to class for two years, and then, took it to Afghanistan for over 10 months. (I also have a MULE that a service buddy gave to me.) I used it occasionally since then, and began carrying it again with me to work almost a year ago. Aside from a little wear on the bottom, and the name tape sewn to the back being faded, my H.A.W.G. could be a month old, instead of over seven years old.

The one area that the H.A.W.G. is sometimes not ideal, is the load-carrying capacity. It's a little over 1200 cubic inches, which is fine for a few books, or a compact change of clothes, but not big enough (for instance) for several extra-large books and a laptop. So, with winter approaching, I decided to get a larger pack.

I have frequently used LA Police Gear for buying outdoors and "tactical" products. Prices are usually very fair to great, and shipping almost always very timely. They sell a "3 Day Backpack" that they claim rivaled $100 to $250 packs. I was dubious that a pack that usually sells for $30 was that good, but since LAPG had always treated me well in the past, I decided to give it a try.

I bought the pack for an even lower than usual $25.99, along with a few other bags and containers. It shipped 17 December, 2010. My first impression was that the size was pretty good- maybe even a little larger than I needed. 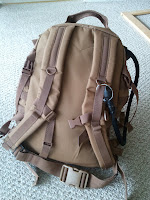 I would have preferred a hydration bladder, but for $30, that was unrealistic. The zippers were large, but did not run as freely as I would like. The material felt a little thin and weak. The carry straps were reasonably well padded and wide, with an unpadded waist carry strap with a large fastex-type buckle. 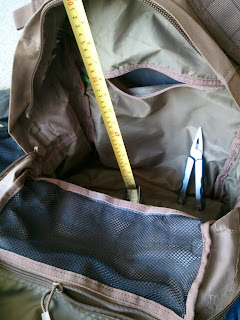 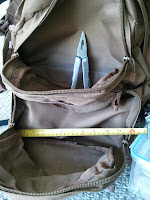 The overall layout of the bag seemed pretty good. Aside from the zippers sticking somewhat, and the bag material not feeling strong enough, the only major problem I had with the bag was the lack of additional small pockets for pens, knives, flashlights, lighters, multi-tools, and other small pieces of equipment. I purchased an LAPG Gear Organizer for $9.99 to give me additional space for hygiene items like a toothbrush, travel deodorant, and hand sanitizer.  (LAPG no longer seems to be offering this small bag, but it's similar to this Maxpedition.) 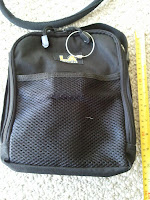 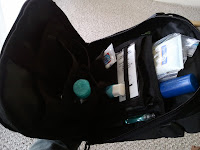 The 3-day pack was sent from LAPG on the 17th of December. I used it an average of 4 days a week for just under 3 months.  With the addition of a Camelbak hydration bladder, and the organizer, the 3 Day worked well for carrying a lunch, miscellaneous small gear like cell phone and BlueTooth chargers, my gloves, balaclava, watch cap, and sometimes, a change of clothes.  While being bigger than needed for most purposes, the 3 Day was almost perfect for carrying bulky but lightweight gear.  I added an Airframe and Powerplant Mechanic ring from County Comm to hold the nozzle end of my Camelbak hose, which I funneled out through a velcroed opening.  The ring worked- mostly.  It was a little too large to always securely hold the nozzle.  This was mostly just inconvenient, except when the protective "valve cover" nozzle cap was knocked aside, and the nozzle end of the drinking tube dragged on the bottom of some rarely-cleaned floor of a guard post. Considering the bladder and organizer, total cost was about $70- not too shabby for a pack this size with a hydration bladder. 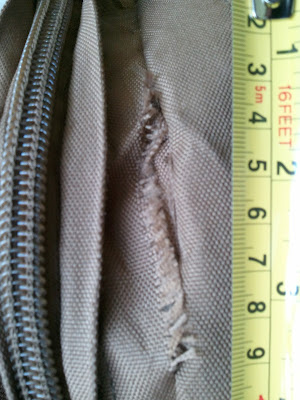 This is an almost 3" rip that happened with nothing more strenous than carrying 20 pounds, and probably no more than 15 pounds worth of gear in this pack. Most of that time was spent sitting on the floor of a guard shack. Examining the rest of the pack showed this wear: 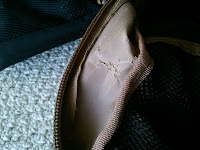 Considering the very short period before the damage, the LAPG 3 Day Pack was not a good value. You often hear "you get what you pay for". In this case, that definitely appears to be true. 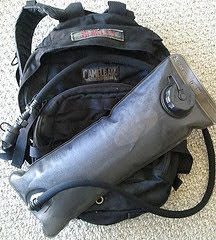